Epicurus (341–270 B.C.) founded one of the major philosophies of ancient Greece, helping to lay the intellectual foundations for modern science and for secular individualism. Many aspects of his thought are still highly relevant some twenty-three centuries after they were first taught in his school in Athens, called “the Garden.”

Epicurus's philosophy combines a physics based on an atomistic materialism with a rational hedonistic ethics that emphasizes moderation of desires and cultivation of friendships. His world-view is an optimistic one that stresses that philosophy can liberate one from fears of death and the supernatural, and can teach us how to find happiness in almost any situation. His practical insights into human psychology, as well as his science-friendly world-view, gives Epicureanism great contemporary signficance as well as a venerable role in the intellectual development of Western Civilization.

The Epicurus & Epicurean Philosophy web site is a modern on-line version of the Garden, introducing Epicureanism to both the serious student of philosophy and to anyone seeking useful and inspiring ideas, and helping to bring together those who are interested in it. Follow the links below to learn more about Epicurus and his philosophy! 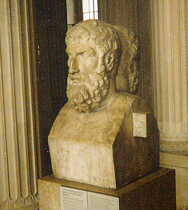 If you are interested in discussing Epicureanism and related subjects, epicurus.net is proud to offer you the Epicurean Philosophy List (EPL), a private, ad-free e-mail list devoted specifically to Epicureanism.

These and other Epicurean lists can also be used to learn about Epicurean social and educational activities, including recent proposals for the formation of an international Epicurean organization. This web site and the Epicurean web sites listed on the on-line resources page also occasionally mention these activities.

“Let no one be slow to seek wisdom when he is young nor weary in the search of it when he has grown old. For no age is too early or too late for the health of the soul. And to say that the season for studying philosophy has not yet come, or that it is past and gone, is like saying that the season for happiness is not yet or that it is now no more. Therefore, both old and young alike ought to seek wisdom, the former in order that, as age comes over him, he may be young in good things because of the grace of what has been, and the latter in order that, while he is young, he may at the same time be old, because he has no fear of the things which are to come. So we must exercise ourselves in the things which bring happiness, since, if that be present, we have everything, and, if that be absent, all our actions are directed towards attaining it.” —Epicurus, Letter to Menoeceus

The Epicurus & Epicurean Philosophy web site, hosted by Vincent Cook, has been on-line since December 4th, 1996.